It is getting cold here and before my blackberries hibernate for the fall, I took this super pretty picture of it. You guys, this is just a little part of the blackberry patch I have in my yard. Although some neighbors are not very happy with their patch thinking that blackberry vines are a nuisance, I beg to disagree. Yes, it has very pointy thorns and it can really crawl to the porch faster than you can say blackberry, but having lived in Kansas and I had known how expensive blackberries are sold in the store, I say, send all those blackberries my way and I’ll make them into a Blackberry crumble, Blackberry pie,blackberry smoothie and whatever…

So enjoy this Blackberry Crumble as the initial Blackberry post coming your way very very soon.

I still have 5 more cups of Blackberry in my freezer; but since I can, I went to the Blackberry patch and harvested 6 cups of Blackberry and made this crumble for my friend’s 50th party potluck. I was very hesitant to bring pie to her party because most of the guests are Filipinos. And as you know PIES AND FILIPINOS are just a strange or weird combination; but I thought, why not? Saying I was worried was an understatement because I don’t want my Blackberry Crumble to be ignored specially when it’s competing against the Leche Flan and the Dinuguan… I was afraid it will just be left uneaten. As a benefactor, it feels so insulting when your food is the only one left untouched. But, I was glad that some Pinoys were adventurous and ate the whole Blackberry Crumble before the party even started. I even hope the birthday girl was able to taste it.

So guys, dig into this Blackberry Crumble. It has a gentle taste of ginger and the balance between the Blackberry and sugar. It is super delicious. 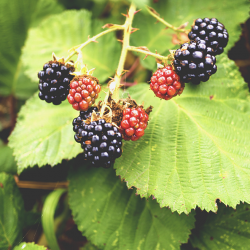