Pork Sinigang sa Bayabas. Sour broth made from scratch. Instead

Pork Sinigang sa bayabas.Sour broth made from scratch using guava instead of the usual Sampaloc mix. The broth is similar to just the store bought mix. Hey, guys!! We are getting close to Christmas. And that means cold weather is upon us. In my nook here, I think we just skipped fall. We had a tad of snow and lots of colds days, so this Pork Sinigang sa Bayabas will warm and comfort you. Sinigang sa Bayabas is a different version of Sinigang in the sense of its ingredient to make the broth sour. The most common use to make the broth sour is sampalok or tamarind or even an instant Knorr Sinigang mix. But we are going all authentic here. We are not using instant but from scratch. How does that sound? It’s exciting huh!!

In this post today, the video will guide you on the process of making this favorite Filipino dish. As what I mentioned awhile back, we are going traditional. We are using all fresh ingredients.

Making this Sinigang is a very easy process. Similar to the other soup in the blog, making this singang is like 1,2,3. 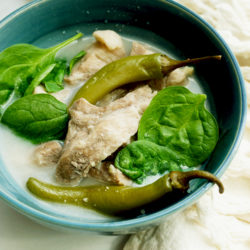 Pork Sinigang sa Bayabas. Sour broth made from scratch. Instead of the usual Sampaloc Mix, we used guava to give the broth its sourness.