Suman Balanghoy Cassava is one of the most delicious and easiest-to-make desserts you can find. It’s a native Filipino delicacy made with three common ingredients perfect for any occasion.

In the Philippines, Suman Balanghoy (Cassava Suman) is wrapped in banana leaves which give it the distinct flavor and aroma necessary for the suman cassava recipes. It gives you that extra boost of energy after a long day at work or school. Just 1 to 2 pieces is enough to make you feel rejuvenated.

I always thought that I am/was born an entrepreneur. When I was 9 years old, during summer, I always hang out at my neighbor’s house and I helped her out making CASSAVA SUMAN for her small snack business.

I was not paid for that labor, but I found myself helping her out every day. I was assigned to grind the cassava and wrap them in the banana leaves. In that little venture, I’ve also learned how to make Hot Mongo, Arroz Caldo, and Turon.

In the old days, I had to manually grind the cassava, but now, you can purchase a pack of frozen grind cassava- all ready to cook. I’ve used it before, but the taste and the texture of my Bud bud were just awful; so, every time I make my Cassava Suman, I grind it myself while watching Netflix or listening to music just o pass the time. Enjoy this Bud-bud Balanghoy, will you? Why use grated Cassava?

Cassava, a starchy tuberous root is a staple food crop that is harvested year-round.  It can be enjoyed either fresh or processed into different kinds of food particularly suman. There is sweet Cassava which is the most popular choice to make suman, biko, and ginataang mais.  On the other hand, bitter Cassava is usually processed into Cassava tapioca which comes in different forms like flakes or pearls.

Sweet grated Cassava is not only its main ingredient but is also the secret to its unique texture.

This sweet dessert also called Sumang Kamoteng Kahoy or Budbud Balanghoy is usually made from grated cassava, coconut milk, and brown sugar. I prefer fresh Cassava over frozen Cassava since it tastes a bit sweeter and I love the texture.

To cook a Suman Balanghoy (Cassava Suman), I mix all three primary ingredients – grated Cassava, brown sugar, and coconut milk – and arrange prepared suman on the banana leaf. Fold banana leaf and seal at the end. Line the Cassava Suman in the steamer and steam for 45 minutes.

It’s best eaten warm especially during cold days especially when you pair it with hot chocolate, coffee, or tea. Add grated coconut or desiccated coconut for the toppings. Is Cassava Suman safe to eat?

Yes! Cassava Suman is 100% safe to eat. However, make sure you don’t leave it overnight because cassava contains a substance called linamarin which generates the poisonous hydrogen cyanide when mixed with water or when improperly stored. This can be beneficial in small amounts, but ingesting too much of this substance might cause health problems such as vomiting, diarrhea, and even death.

Suman Balanghoy (Cassava Suman) is good for the heart. It has fewer cholesterol levels which are very important in maintaining a healthy heart.  It can also help prevent cancer because of its antioxidant properties.

Suman Balanghoy offers other health benefits thanks to coconut milk which is low in saturated fats making it one ingredient that doesn’t contribute to obesity and high blood pressure. It is high in dietary fiber which makes it perfect for those who are health-conscious because you can lessen the calories that you consume per day without sacrificing your taste buds too much.

There are also some health benefits in eating Suman because of its high starch content thus, it’s a sugar substitute for diabetics. It has a low glycemic index and doesn’t lead to insulin spikes which cause an increase in blood sugar levels.

The materials you need:

It’s made from glutinous rice and brown sugar. The mixture is wrapped in banana leaves then steamed until cooked. What makes this suman special is the addition of grated young coconut meat and the two layers of chocolate and milk intertwined together bringing a complimentary taste to this Filipino delicacy.

This is a variety of Suman made from glutinous rice and coconut milk. Instead of banana leaves, Suman sa Ibus is wrapped in buri or palm leaves.

It is a Suman from Laguna and Cavite that uses lye water or “Lihiya” adding it to the glutinous rice. This variety is sweeter compared to the other kinds of suman which makes this Filipino dessert even more enticing. It is best served with latik or coconut syrup.

This is another variation of suman made from glutinous rice flour, coconut milk, and sugar. It is a basic suman recipe that can be topped with latik or ripe mangoes.

Why do Filipinos love the Cassava Suman recipe?

This delicacy is enough to put smiles on Filipino people. It’s rich in nutrition calories and its sweet taste and soft texture make Filipino people love it more especially when topped with their preferred latik (coconut syrup) or grated coconut. It’s easy to cook too even for beginners who want to learn how to make suman for the first time. Suman also brings back a lot of memories that every Filipino will cherish. It is a common sight during special occasions like the celebration of a newborn, bridal shower, and baptisms. These sweet memories make suman more appetizing for those who want to try this Philippines’ traditional delicacy.

For More Suman Recipe in The Skinny Pot blog: 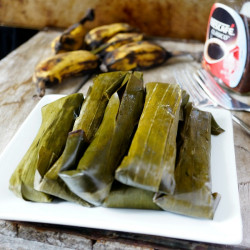 Suman Balanghoy Cassava is one of the most delicious and easiest-to-make desserts you can find. It's a native Filipino delicacy made with three common ingredients perfect for any occasion.
5 from 1 vote
Print Pin Rate
Course: Dessert
Cuisine: filipino cuisine
Prep Time: 30 minutes
Cook Time: 45 minutes
Servings: 12 people
Author: shobee