PUTO CHEESE WITH EGG WHITES. This is a simple way to use egg whites. This is an easy recipe that yields  a soft and fluffy puto. I usually make this when I make Leche flan, use of the egg whites.

It was a recess. I was seating on the cement fence in front of my school with my legs hanging and swinging as I watched  intently of the “game” in front of me. I was clutching my Puto Cheese in both hands. The game was called Chinese Garter. And how did I end up seating on cement fence? Because I was eliminated from the game.

Chinese garter game is almost similar to a hurdle game; but instead of a bar, it is a long garter which is held by two people. You jump with both legs and once the garter is caught in between your leg, you are out. I always got to stay on the loser’s corner because I did not have what it take to win a Filipino game. Whether it is Patentero, Buwan-Buwan or Luksong Baka.  These games need flexibility, agility, and quickness. I did not have those, so I always end up in the loser’s corner and I was forcing myself  to cheer for the other players.  Then the bell rang and we ran to our respective classrooms.  This routine happens every day during school days.

When I went home 2 years ago, I happened to pass by my old school and the fence was ruined from the 2013 earthquake. The school’s building which was made from cement was replaced by mock up rooms. In spite of the rubble, the memories of those buildings are still vivid to me.

It is where I learned my first lesson about sportsmanship.

It was also where I won the Most TALKATIVE AWARD ( right now, I am cringing with embarrassment but I have to elaborate). In spite of the sash with the Most Talkative award scribble on it, and a matching crown, I tell you this is not a good award. You get to sit on a green chair on the side wall while your classmate conspicuously check if you were embarrassed enough to warrant a tear. Pretty much it embarrasses you in front of the crowd.

In that school premises, I was able to spend time with my mama and my aunties since they were teachers in that school.

And it is where I tasted Puto Cheese, which is the official pair for  Dinuguan.

It pains me to see the symbol of the good memories is now reduced to rubbles. But the memory in that school still lives; so I am re- creating it with this dessert. Enjoy it.

WHAT IS PUTO CHEESE?

Puto cheese is a Filipino snacks made mostly with flour and milk. A baking powder is added as leavening agent to make the batter puff, soft and moist. Steaming is the method of cooking it.

HOW TO MAKE PUTO CHEESE WITH EGG WHITES

PUTO CHEESE WITH EGG WHITE IS THE NEXT INSTALLMENT of my3 Ingredient No Bubble Leche Flan . REMember when I separated the egg yolks from the egg whites? So here it is the egg whites in the Puto Cheese form.
Course Main
Servings 40 puto
Author [email protected]

I made this without the Cheddar cheese on top and the Puto Cheese was still delicious, but I prefer the contrast between the cheddar and the sweetness of the Puto. USE THE EGG YOLKS TO MAKELECHE FLAN If you want different flavors: Divide the batter into 3. Put it in separate bowl, and add 2 teaspoons of your favorite flavor in each bowl. I do not use a toothpick method in this because usually, the puto still come out uncook even when the toothpick comes out smooth; so using a pointy knife, gouge out and peek if there is still soft batter underneath or in the middle. Then continue steaming.
Previous Post: « PICHI PICHI
Next Post: KUTSINTA RECIPE » 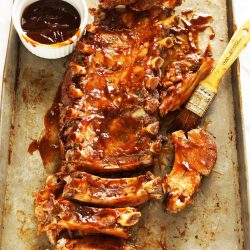 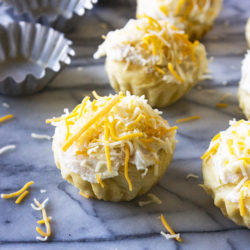 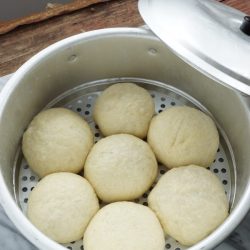 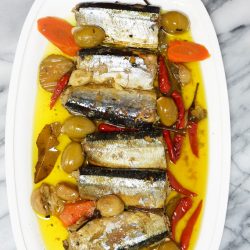 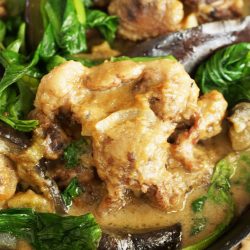