How to make Egg Pie? Egg pie is a favorite Filipino dessert which are often sold in Filipino bakery. Egg Pie is a Filipino counterpart of Egg Custard, although I find some differences in its sweetness and texture. To me, Filipino Egg Pie is sweeter, firmer, it is also “eggy” in taste and the texture is more defined compared to the one I tried here in the US. Also, there is no cream nor any nutmeg added in this Egg pie.

I haven’t have an Egg Pie in a long, long time. Twenty-two years to be exact. So when I saw egg pies sold in our grocery store, it brought great memories when I was in the Philippines, so I decided to make Egg Pie ASAP just to remember the old days when I was in PI and just to remind me of its “eggy” taste. I baked this Egg Pie for 1 hour and 15 minutes and when the Egg Pie was done and ready to eat, my children were very eager to try it. My kids who are used to American desserts liked it, so I am making 4 more for Thanksgiving – two Egg Pies for our Thanksgiving dinner and 2 for my husband’s office Thanksgiving party.

Some people have this impression that Egg Pie is hard to make; but it really isn’t. All it take is mixing the ingredients and you are good to go. Initially, I was planning to make my own Egg Pie crust, but this time, I just opted for the ready made pie crust I got from the store so this Egg Pie turned out to be EXTRA quick and easy to make. 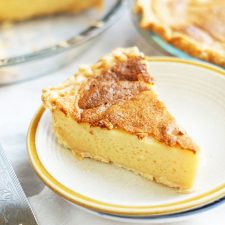 HOW TO MAKE EGG PIE