HOW TO COOK RAINBOW TROUT FISH CAKE. …Hey, guys!! Today, we are going to make Rainbow Trout Fishcake and I really think that even the most seafood phobic person can actually make this fish cake recipe and even eat it… proof to that is my son who said these fish cake is really good and I agree with him 100 %. So my husband has a new found hobby, and it is fishing . Actually, he has been fishing, or trying to catch a fish for several summers now, but always come home empty handed… until this summer, when he actually meet the guy who runs a Fishing Facebook account he followed.

So he met the guy by accident —– when he was trying to fish for a Rainbow Trout in one of our lakes here.

Guys, we are talking about fate here, so brace yourself.

So my husband woke up one weekend and once again trying his luck on catching Rainbow Trout. I am actually keeping my fingers crossed hoping that this time, he will finally catch some fish. I really do not want him to be disappointed- again. So he and my son departed to fish in one of our lakes here…

So my husband and my son was trying to catch a fish for several hours now and was about to call it a day. Yes there is no fish in there large bucket and maybe feeling dejected, they  he decided to strike a conversation with a guy who was able to catch 15 pieces of large rainbow trout. And from that small conversation, they introduced each other and he found out that that  guy was the owner of the Facebook fishing page he followed,. So this guys is a fishing expert…. AND THE GUY TOOK “PITY” on my husband and he taught him how to fish : what bait to use, how to throw the line and all other information and since then, after that fateful day,  he always come home with Rainbow trout on hand.

I hope you enjoy this recipe… 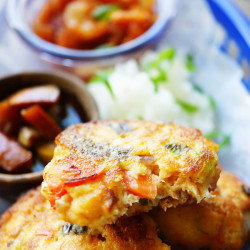 In this recipe, I boiled 2 pounds of rainbow trout with 2- 3 cups of water, seasoned it with salt and pepper and cook it until soft. I then debone the fish and make sure there is no bones left and used it in this recipe.
Tried this recipe?Mention @theskinnypot or tag #theskinnypot!