How do yo make a nom dense Spanish Bread?

Soft and fluffy Spanish Bread recipe and step by step instruction video for your success. Easy list of ingredients that are pantry staples,  and clear guide in using them.

HOW TO MAKE A NON DENSE SPANISH BREAD

If you live in Visayas region, specially in Cebu, you must be familiar with Anita’s Bakery. This is a bakery that is open 24 hours 365 days a year, and its light is turned on to the highest level, that you cannot miss it even in the darkest moment of dawn.

My board mates and I always had fun eating Spanish bread during finals week; while we were studying and goofing at the same time. Then we’ll decide to walk to Anita’s bakery at 2 AM and have our fill with this deliciousness. Aside from the soft and fluffy bread, I love the filling the most. It is sweet and crumbly from the bread crumbs and just sooo good – I did not realize I already ate 3 pieces of it.

SO, I AM URGING YOU GUYS TO MAKE THIS FILIPINO SPANISH BREAD AND SHARE NOSTALGIA WITH ME.

Making Spanish bread is really easy to make. The only problem is that sometimes, it will turn out hard and dense. So the challenge is in making your Spanish Bread soft and fluffy.

I understand that you want your Spanish Bread to be is excellent the first time you make them, but most of the time, as first time Spanish Bread baker, the dough  and bread becomes hard and there’s a solution to that. How to make this Bread

As what I mentioned, making Spanish bread in general is not hard and one that really rises during fermentation is hard to come by for some amateur bakers like you and me; so I will share with you my tricks, to make a soft and fluffy Spanish Bread.

There are several kinds of bread in the Philippines which we like. 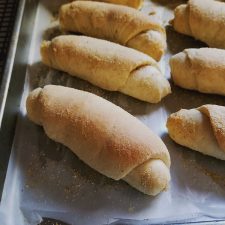 HOW TO MAKE A NON DENSE SPANISH BREAD