How to Make Puto Flan. Use your eggs and not waste it. Make this using the egg yolks and egg whites in this easy recipe.

Hey, guys! Today, I am sharing this Filipino dessert which is a combination of the two favorite Filipino desserts – Leche Flan and Puto Cheese Usually, it is serve on special occasions like Christmas, but in my household, I made it just because…

I got the recipe from Lalaine ,the author of Kawaling Pinoy blog, but I revised the recipe for a bit. I added vanilla, and instead of kalamansi, I used lemon. So, this should, hopefully meet your requirement of how a delicious dessert should be, so I am excited to share it with you, guys.

This Puto Flan is my go to recipe for any party I attend to, because it is very easy to make. It may seem like it is difficult, but once you get the hang of it, it is easy peasy. In fact I made it again  for some friends.  You can make it ahead of time so that you can focus on other things in your household. This recipe will  yieled 22  pieces which I think is enough for a large crowd.

If you have big amount of egg at home, make this recipe: 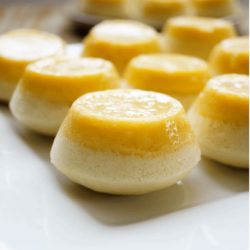 How to Make Puto Flan or Leche Puto Recipe

No ratings yet
Print Pin Rate